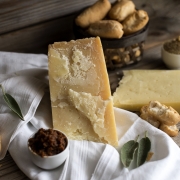 Product and process innovations may contribute to reinforce the relationship between an Italian excellence like Montasio PDO, territory and traditions.

In the past, the focus of dairy production was the selection of cattle breeds with a high productive specialization and industrialization of transformation processes. Today, the product’s origin and protection of the environment and animals’ health are a priority. In fact, even customers are more and more interested on these themes.

In this context, the experimentation supported by the Research and Technological Innovation Center for Agriculture of the University of Udine in collaboration with the Livestock Owner’s Association of Friuli Venezia Giulia moves forward for the sake of the production of Montasio Pdo cheese with the labels “Product of the Mountain” and “Italian Red Pied Only”.

In order to obtain the Montasio Pdo label, the cheese shall be produced in the area indicated by the Consortium for the Promotion of the product:  http://www.montasio.com/montasio-cheese/#production-area. Moreover, only the cheese produced with raw milk collected, processed and matured (for at least 60 days) at over 600 meters of altitude may be classified as “Product of the Mountain”. The further indication “Italian Red Pied Only” refers to the milk, which shall derive from animals that are inscribed in the herd book of this breed, recognized as “breed of national utility” in the 50s already. Where does the Red Pied come and when did it first appear? This specific cow takes origin from an experiment for the genetic improvement of the old Friulian breed through subsequent crossbreeds with the Fribourg breed first and Simmenthal at a later stage. In the early Sixties, this breed became very popular all around Italy and in 1986, the Friulian Red Pied turned into the Italian Red Pied.

Organoleptic and nutritional characteristics of cheese are deeply influenced by feeding of cows, which during summer graze free. The production of Montasio Pdo in the Alpine areas has a positive impact on the environment, since it contributes to the protection of agrobiodiversity and conservation of grasslands and pasture areas, as well as to the employment of inhabitants.

Montasio PDO-PDM-PRI is available at the Malga Montasio already, easily accessible by car from Sella Nevea (Municipality of Chiusaforte), and at the farm shops of the Dairy of Ugovizza.